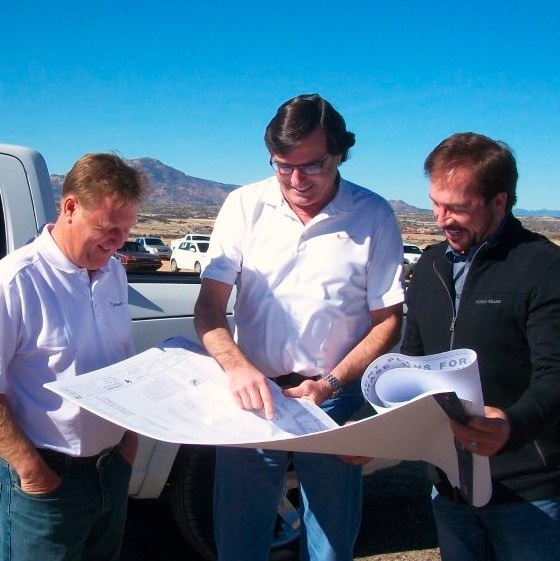 In a just few weeks, roads and roofs will replace raw earth as Granite Dells Estates Properties construction begins.
Located a few hundred yards south of Granite Dells Parkway off Highway 89, the 1,100-acre subdivision will be phased in. Phase One is scheduled to open in July. It will contain 208 homes and planned acreage for commercial development and retail opportunities.
Mike Fann, president of Fann Contracting and developer of “The Dells,” said the first phase is the biggest in terms of initial construction of homes.
The Dells was approved by the City for up to 918 homes. Fann noted that future phases will offer larger home sites for those wanting a rural feel, but with proximity to city services. The full number of homes will not be built immediately, he said. “Our vision is it will take several years to attain build-out.”
Lot sizes within the multi-million dollar development will vary, depending upon which phase they are in. Lot sizes vary from one-fifth of an acre up to three or four acres.
Prices for lots also vary, depending upon their release time, Fann said. Home prices in Phase One will begin in the mid-$250,000s.
Fann says underground utility infrastructure will be inclusive: city water, sewer and garbage collection, natural gas, electricity, fiber optic services for cable TV and Internet, and telephone and other electronic communications.
In mid-January, the Prescott City Council approved a $1,730,660 contract with Fann Environmental for a new pump station to serve The Dells.
That cost is funded 100 percent through impact fees since it is for new growth, the Prescott city utilities manager said.
The pump station and nearby 3.25 million-gallon water tank will serve not just The Dells but also areas north and south of Highway 89A.
City of Prescott Director of Economic Initiatives Jeff Burt said of the new community, “The Dells will contribute an essential component to the newly planned economic development strategy for the airport area. A fundamental goal in this strategy is to create a ‘live, work and play’ environment that brings a quality of life experiences. Such experiences will be unmatched in the Greater Prescott area. The Dells delivers an important residential element to this goal.”

Initial Home Construction Will Be By Mandalay Homes
Fann will not be involved in actual construction of residences.
“We’re partnering with the award-winning Mandalay Homes, a Prescott-based home builder that has been constructing houses in the Quad Cities area for several years. We’re proud to feature Mandalay Homes as our preferred builder, especially because it recently won a U.S. Department of Energy ‘Housing Innovation Award’ for energy efficiency at the national conference,” Fann said.
“We are intent on making The Dells a premier residential area that offers owners a healthy, energy efficient and environmentally sustainable lifestyle. Mandalay Homes will make that happen.”
Mandalay Homes currently builds at several local communities: Chino Valley, Prescott Valley and Prescott.
Mandalay Homes President Dave Everson takes pride in the fact that he uses local labor and local suppliers in the communities where he builds houses. “We are using the energy efficient windows and doors manufactured in Prescott Valley by the award-winning MI Window and Door Co. We are also buying building supplies from Foxworth Galbraith in Prescott.”
Everson and Vice President for Sales Bill Hammond are adamant, too, that the houses they build at The Dells will be “…exceptionally home energy efficient, notably because of innovative technological advances in construction that were not being used just 10 years ago.
“Every single house we build, regardless of size or square footage, will be performance tested with the ‘Home Energy Rating System [HERS],’ a federal rated scoring system for measuring a home’s energy efficiency. We build homes to be at least 65 percent more energy efficient than existing homes,” Everson said.
Hammond says different model homes should be ready for the projected July opening.

Open Space, Natural Environment and Walking Trails Also a Priority
“What’s also going to make The Dells unique is the dedicated open space within the development. The way we have creatively platted the community, approximately one-fourth of the development – almost 300 acres – will be open space with hiking trails. Residents will be able to walk out their doors and be within a few feet of trails – miles of them,” Fann said.
Fann stressed that trails would follow natural contours of the terrain.

“We’re also leaving space for wildlife corridors. What we think is neat is that the many trails will link to the historic and popular Peavine Trail, which wanders down to the Watson Lake area and along the old railroad bed. They’ll also tie into the open range and the historic Iron King Trail that heads toward Prescott Valley.”
If Fann seems focused on open space and trails and vistas rather than cookie-cutter, side-by-side homes that look like they came from copy machines, “It’s because I want The Dells to be the first major community of its kind in the Quad Cities area. I want to fuse ecological and environmental concerns with attractive, practical, professionally designed and engineered homes that people will be proud to live in for years to come.”
Fann is no newcomer to contracting and construction in Prescott. His parents, Jim and Sylva Fann, founded Fann Contracting as a small backhoe business in 1960. Since then, the company has grown into one of Arizona’s major heavy construction contractors.
Their son, Mike, attended Prescott High School and ultimately earned a bachelor’s degree in engineering construction at Arizona State University in 1980. He is the second generation to head the company. Fann now administers a company with some 200 employees, a payroll into the millions of dollars, and an inventory of capital equipment that most would view as stratospheric.
Fann shares some of the executive work with his son, Jason, who also earned a degree at the ASU School of Construction in 2002.
“I have to confess that in 2007 and 2008, during the Great Recession, things didn’t look good. But now, with the uptick in the economy, we’re feeling pretty good. We did about $70 million in business in 2014, and I think we’ll do well this year,” Fann said.
Jason agreed,” We’re confident The Dells will be a popular master planned community that will appeal to many residents.”
Further information is available by contacting Fann Contracting at 928-778-0170 or their website at www.thedellsprescott.com. QCBN